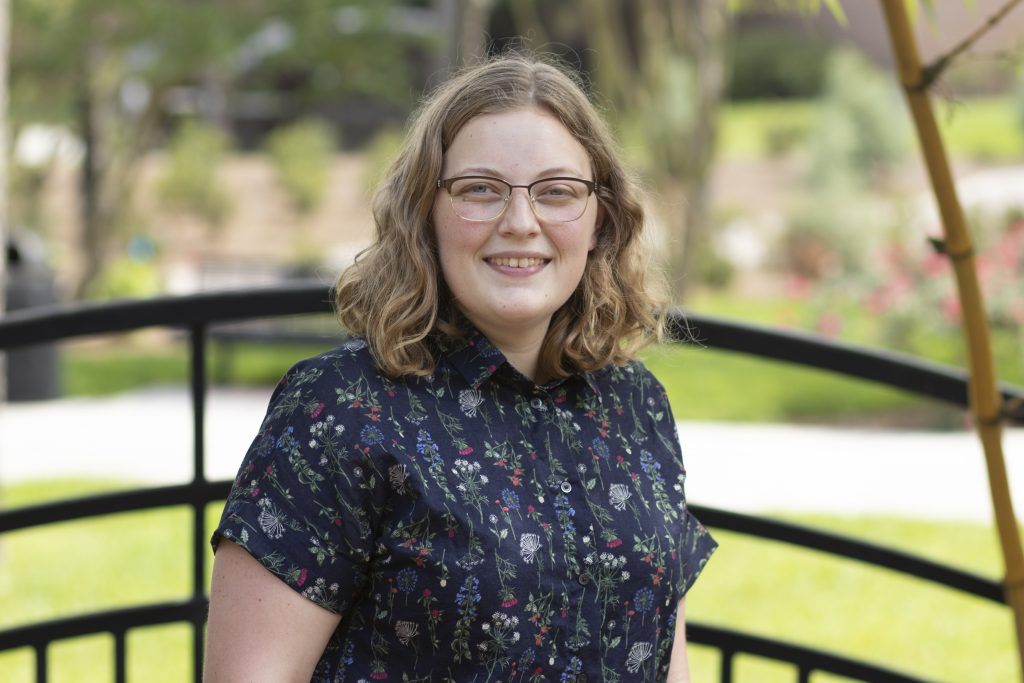 Katie Stahlhut, a UCF biology major, University Honors/Honors in the Major student and National Merit Scholar, recently got a boost for her scientific aspirations, receiving the prestigious Goldwater Scholarship.

Established by Congress in 1986, the scholarship, named for former U.S. Senator Barry Goldwater, provides up to $7,500 a year in support of undergraduate students intending to do research in STEM fields. The selection process is highly competitive; approximately 320 scholarships are offered annually. Just eight previous UCF students have received the Goldwater Scholarship.

“It’s given me the confidence to apply for other really selective scholarships in the future,” Stahlhut says. “And I don’t know if I would have done that had I not gotten this.”

Stahlhut works in the lab of biology Assistant Professor Chase Mason, where she researches the symbiotic relationship these microbes — known as mycorrhizal fungi — have with cultivated sunflowers. As part of Asteraceae, the largest family of flowering plants, sunflowers serve as a useful model for how other plants interact with their environment.

“There’s just so much that people don’t understand is happening under their feet,” Stahlhut says. The soil beneath us conceals a “Wood Wide Web” of microbes that helps plants gather and digest nutrients, protects them from pathogens and even communicates through a kind of “telepathic” signal. “When you go into a forest and you see birds and squirrels jumping around – they’re interacting with an ecosystem.”

She wasn’t always enamored with science. In fact, growing up, she hated it. No one in her family had a scientific background, either — her father was a special education teacher and her mother was an accounts manager in her hometown just outside Birmingham, Alabama.

Things changed when Stahlhut took on a summer internship at Birmingham Botanical Gardens, where she worked in the tropical greenhouse and assisted people with special needs in the sensory garden.

“I realized I actually really liked plants,” she says. “And I know a lot about them now.”

Once she came to UCF, she delved further into her new passion, receiving a summer undergraduate research fellowship, joining Mason’s lab and interning for the U.S. Geological Survey.

Stahlhut is studying how sunflower genes affect its symbiotic relationship with microbes. Research suggests that as these plants have been domesticated, they’ve become less adept at cultivating this relationship. By understanding how genes control the process, she says, we could develop improved crops that are more resistant to disease and better able to take in nutrients. And that could have implications for agriculture, including less of a need for harmful pesticides and overfertilization.

Stahlhut will have the opportunity to present her research to an international audience at the Botany 2019 conference, organized by the Botanical Society of America, this July in Tucson, Arizona. This will be the first time she makes a presentation outside of Florida.

“I’m a little nervous about that, honestly,” she says. “But I’m excited to meet all of the scientists that will be there.”

Mason, her faculty mentor, will be right there by her side. He says Stahlhut was part of his first group of undergraduate researchers, and her perseverance inside and outside of his lab has been instrumental to her success.

“The point of the Goldwater is to invest in the future of U.S. competitiveness and security through scientific advancement,” Mason says, “and students like Katie represent the next generation of scientists that will drive progress at a global scale.”

If you are a student interested in applying for a Goldwater Scholarship or one of the many other STEM-related scholarships available, please contact Morgan Bauer, director of the Office of Prestigious Awards, at Morgan.Bauer@ucf.edu. Applicants should be U.S. citizens or permanent residents in their sophomore or junior year of college.