“I obtained my high school degree in mathematical sciences and enrolled in one of the top engineering programs in Morocco. Despite this tremendous academic achievement, I was not satisfied, as I did not pursue the career of my dreams – traveling the globe. I left the university and became a flight attendant. Most of the destinations I went to were in Africa, which constituted an irrevocable opportunity to pursue my environmental dream. One of the major hardships that African people face is the lack of potable water in remote areas. During my recurrent visits to African countries, I was obsessed with finding a solution to overcome this problem. This is when I decided to immigrate to the United States and enroll in mechanical engineering. I started with a two-year program in Valencia College before transferring to the University of Central Florida, where I completed my undergraduate studies.”

Adil Riahi has quite the story. Originally hailing from Tetouan, a small city in Morocco, Adil has now found himself at the Burnett Honors College. He explains that his desire to study the environment began as a child, when he moved from his home in Tetouan to Casablanca. “I felt the arid atmosphere during my first day in Casablanca, which made me value the aesthetics of nature in Tetouan. On that day, my quest to appreciate the environment started.” Though he completed his undergraduate education in Fall 2020, he plans on staying at UCF to obtain his PhD in mechanical engineering – Thermo-Fluids.

During his time in Orlando so far, Adil has found many ways to make the most of his education. In 2017, he became Vice President of Scholarship for the Phi Theta Kappa Honors Society, eventually winning a prize for distinguished Honors-In-Action (HIA) research. In 2018, he began a research project on the Parabolic Solar Trough, a technology that can channel thermal energy “without requiring the large investment and infrastructure of a solar tower.” Adil continued his research with his Honors Undergraduate Thesis, which was on the subject of “Optimizing a Parabolic Trough’s Receiver with an Infrared Selective Coating.” In addition to his research, Adil has learned five languages over the years: French, Arabic, English, Spanish, and Portuguese.

Adil has clearly found his place as a researcher, and he has the accolades to prove it. In 2019, he was recognized as a Distinguished Undergraduate Researcher, in addition to being named a recipient of UCF’s Office of Research and College of Graduate Studies Doctoral Fellowship. Currently, he works as a Graduate Research Assistant at the Center for Advanced Turbomachinery and Energy Research (CATER).

As he continues his education, Adil plans on using his past research to develop more ways to utilize parabolic solar panels. For example, he discusses a practical implementation of his research, saying, “The project will be exported to families living in rural areas in Africa and Puerto Rico to help overcome the calamity of Hurricane Irma.” Having traveled around the world for six years, Adil has seen firsthand how important it is to efficiently preserve the environment, especially in order to help underserved communities.  Now, he’s using his experience to have a positive impact on the world around him. 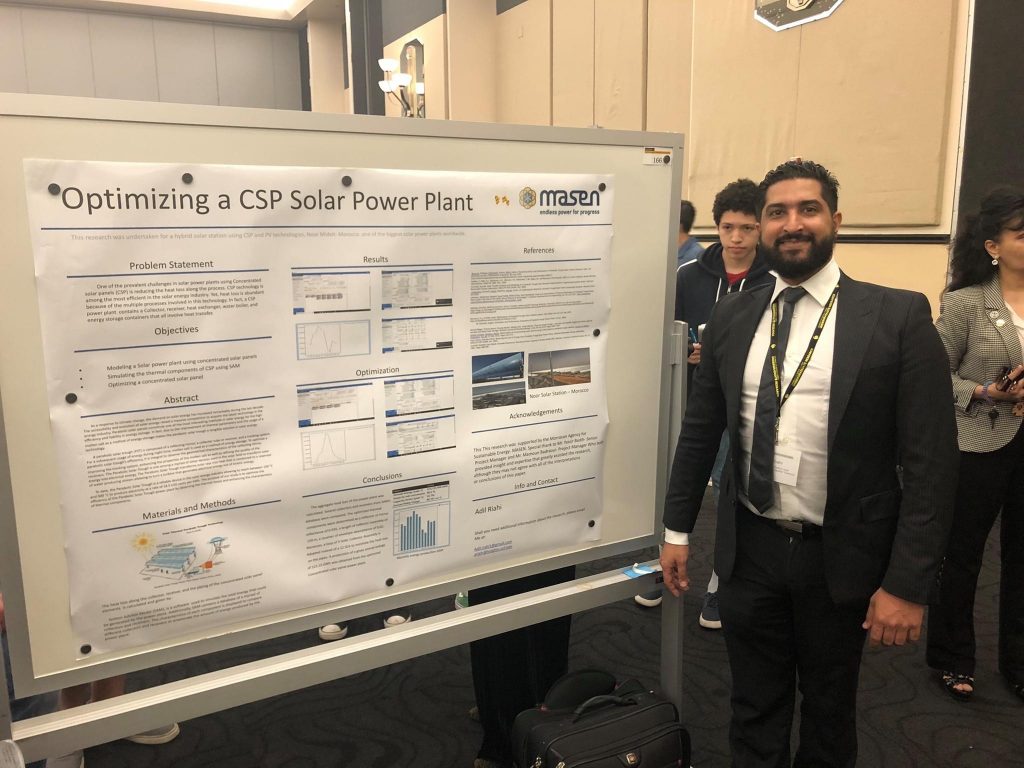