Interested in the Foreign Service? Stephanie and Scott Straface will share how they began their career with the U.S. Department of State, as well as lessons from the field.

Stephanie Straface '11 (BHC) is a Foreign Service Officer with the U.S. Department of State. She has served many consular tours, as well as serving as a Watch Officer at the Bureau of Intelligence and Research. She is currently the Assistant Public Affairs Officer at the U.S. Consulate in Almaty, Kazakhstan. As a Thomas R. Pickering Fellow she obtained her M.A. in International Relations and Diplomacy in 2013.

Scott Straface is a Consular Officer in Almaty, Kazakhstan with the U.S. Department of State. Scott served three tours in Iraq as a U.S. Marine infantryman. He majored in Intelligence Studies at American Public
University. Scott has served as a Security Protective Specialist in both Iraq and Afghanistan.

I would like to enhance my education by becoming an active participant in research and complete my own thesis.

I would like to travel abroad to make an impact on global communities and immerse myself in an academic and cultural experience.

I would like to get involved with the Honors community and meet other Honors students.

I am interested in national and international fellowships and scholarships.

Congratulations to the following BHC alumni for being named to the UCF Alumni Association’s “30 Under 30” list! Andrew Aboujaoude ’18 (Biomedical Sciences) Jonell Radabaugh ’15 (Mechanical Engineering) Amanda Schultz ’17 (Nursing) Finalists for the “30 Under 30” must meet the following criteria: Must be a graduate of UCF (undergraduate or graduate degree) Must be […]

Congratulations to Our Order of Pegasus Recipients! 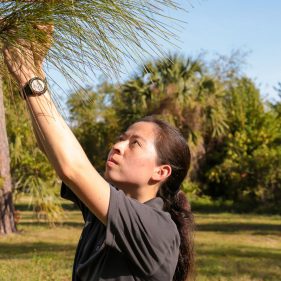 BHC Scholar Amy Lebanoff studies fluid dynamics, which for her current project translates into researching how raindrops impact pine needles. She wants to learn exactly how the foliage protects the trees, surrounding plants and the overall environment, with hopes that engineers can learn to mimic it and find ways to help protect against Mother Nature. […]