Landon Lai is a UCF freshman and BHC scholar. He majors in Writing and Rhetoric, minors in Marketing, and aspires to become a marketing communications specialist. Much like his peers, he enjoys watching Netflix, hanging out with friends, working out, and doing all things Gen-Z. But one thing that makes him unique is his experience: he became an international student at the age of 13, took a gap year after high school, worked as an English tutor full-time, co-founded a Gen-Z, non-profit news publication site, and secured his first internship as a freshman.

Landon graduated high school in 2019, but due to familial problems and financial constraints, he opted to take a gap year in his hometown, Hong Kong, where he’d work and save up for college. After his high school graduation, he flew back home and worked as a server at a Japanese restaurant initially. Though productive, he was unsatisfied with his work. Fast forward a few job applications and interviews, he landed a position as an English tutor at a local language school. During the year, he took up Muy Thai, developed a regular workout routine, prepared for the national mandarin proficiency test, completed the International English Language Testing System (IELTS), and traveled in his free time. To him, “having a routine that’s rigorous, diverse, and fresh was important because it helped [him] to focus on tasks that mattered while exploring new talents and hobbies.” Even though his gap year was full of turmoil as Hong Kong was rocked by civil unrest since June 2019 and the Coronavirus outbreak in January 2020, he remained steadfast in his path in bettering and challenging himself.

Landon’s work reaffirmed his desire to study rhetoric. When it came time to apply for universities, he looked for schools with a stellar rhetoric or composition program. However unconventional and bizarre it seemed, he looked forward to working, teaching English, and editing students’ papers. He enjoyed the process of selecting the “right” word for a better presentation, rearranging syntax to make a more lasting impact, and using various rhetorical skills to increase the writing’s finesse. After researching different schools with a rhetoric major, he locked in on the University of Central Florida for three reasons: its location, core curriculum, and the honors college. The Burnett Honors College offered him several benefits too: early registration, small classes, and study abroad scholarships. Landon also values the liberal arts college setting BHC provides. He believes the interdisciplinary seminars that BHC offers will help bridge gaps between subjects, leading to a more fluid comprehension of various topics. He looks forward to “Sex and the Sacred: Religion, Gender, and Sexuality,” a seminar he’ll take in Spring 2020 that analyzes the intersectionality of sex and gender and religion. The culmination of these things enables him opportunities no other schools present. And that’s precisely why he chose UCF and BHC in particular.

As one of the incoming marketing communications associates at BHC, Landon works with industry professionals to contribute to the college’s marketing, advertising, public relations, branding, and events and experience, to name but a few. Even though he just started working for the Burnett Honors College, he knew this is the place for him to grow and develop. Several ideas he pitched in the first team meeting were approved and are under further consideration already. Landon is excited about his journey as a BHC scholar and hopeful about his journey as a BHC worker! 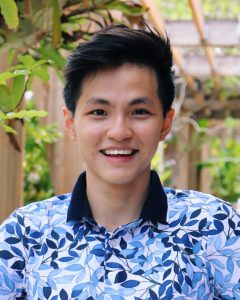 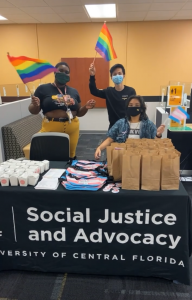